Dubai International (DXB) is the primary international airport for Dubai and the UAE, connecting more than 240 destinations across 6 continents with nearly 100 airlines. The airport has three major terminals and four concourses. With its current capacity, DXB can accommodate 92 million passengers annually.

DXB is the world’s number one airport for international passenger traffic.

In 1960, Dubai International (DXB) was founded as the city’s first airport, with a single 1,800 metre runway made of compacted sand. The airport had served mainly as a refuelling stop for planes up to the size of a DC-3.

Since then, Dubai’s leadership has driven the growth of DXB as an airport and the aviation sector as a whole. With a series of strategic expansion and development projects through the DAEP, the airport has grown in terms of passenger and cargo handling handling capacity, number of plane movements, the network of connected destinations, as well as operational efficiency. Two key projects were the additions of Terminal 2, which increased passenger capacity by 2 million, and then Terminal 3, which increased it to 60 million.

Today, DXB is the world’s number one airport in terms of international passenger traffic and number three in overall passenger traffic. In 2018, 63% of passengers transited through DXB, confirming the airport's position as one of the world's leading aviation hubs and a preferred transit point for international travellers and airlines alike. In terms of cargo, DXB is the sixth-busiest airport in the world, averaging 2.5 million tonnes of cargo annually. 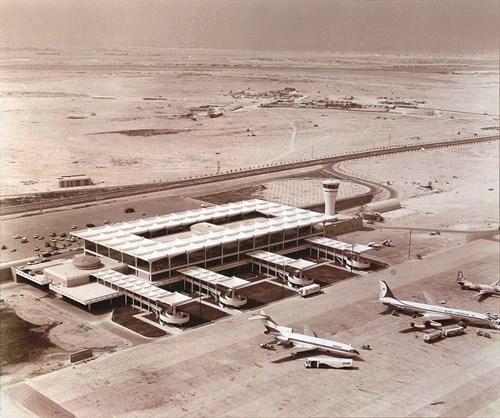 The runway on the south side of DXB is crucial to airport operations, handling over 1,200 flights daily.

Terminal 2 serves as a hub for flydubai, Dubai's budget airline, as well as special-interest flights.

Terminal 3 is the world's largest terminal, serving as a hub for Emirates Airlines.

This state-of-the-art facility keeps with the rising pace of freight movement at DXB with streamlined and advanced systems.

Serving the largest terminal in the world, Concourse A is a purpose-built A380 facility.

This concourse opened as a direct to Terminal 3, the world's largest terminal. It features a host of smart airport solutions.

Concourse C seamlessly links to Terminal 3, the largest terminal in the DXB airport and the world.

Holding the royal aircraft fleet, the Royal Airwing is the primary facility for special interest flights.

Learn About Who We Are

Building a trimodal cargo hub for the world’s freight.

Explore The Logistics District at DWC