Tender for the largest airport in the world launched

His Highness Sheikh Ahmed Bin Saeed Al Maktoum, Chairman of Dubai Aviation City Corporation and Dubai Aviation Sector Board, announced the recent launch of the Substructure Package Tender by Dubai Aviation Engineering Projects (DAEP). This means DAEP has officially embarked into the tendering of the substructure mega project for the Al Maktoum International Airport expansion, in preparation for its award during the first quarter of the year 2019. The substructure package; which is considered the largest project of its kind worldwide, consists of construction works related to the foundations, basement walls, tunnels, columns, slabs on grade and apron slabs of the first Concourse (2.7 km long), the West Terminal Building, the Short Term Car Park and the Staff Car Park.

“An unprecedented scale. Maybe the biggest ever released in its category,” His Highness mentioned in a statement. “We are targeting an award by early next year. More is yet to come and everyone is looking forward to a busy 2019.”

Following the official start of construction in July 2016, the site has completed over 90% of the site grading and logistics packages. Today, DAEP commenced interviewing all joint-ventures and a consortium formed by leading local and international contractors specifically for the job, in order to shortlist those who are pre-qualified to be invited for the tender. 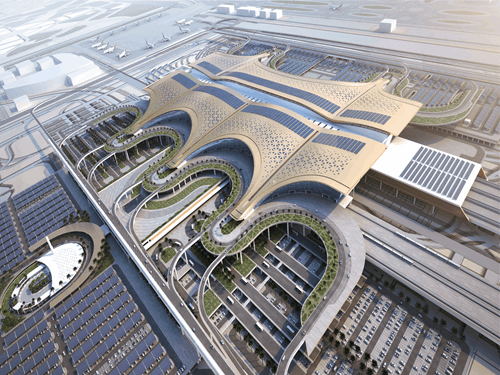 DAEP is fully committed to deliver a large scale airport designed with the capacity to serve the long-term demands of Dubai's aviation sector of Dubai while providing the highest level of services and incorporating the most up-to-date innovative technology, with a vision for Dubai to become the aviation capital of the world.

Making history in the UAE to lead aviation around the world.

Following an ambitious vision to take aviation to new heights.